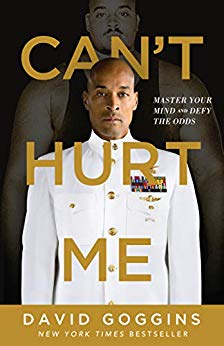 He tells an incredibly inspiring story about overcoming adversity from growing up with a horrifically abusive father to having to contend with the KKK as a teenager in rural America.

I try to learn from anyone and everyone as long as I believe they have a worthwhile story to share. I don’t care if they’re man, woman, Navy Seal or street sweeper, or whether they come from any background or orientation or gender. I consider everyone to be teachers of life.

And David Goggins is no different.

This man may look hard and may speak tough and some of you may not like his penchant to curse. But he has a heck of a story to tell and a powerful message we can all learn from. What he says is simply this: turn your adversity into an unstoppable force to propel you to success.

He starts by telling us how he was routinely belted naked by his deranged and drunken father. I wept when I read this part, partly for the horror a child had to go through and partly for the little girl who lives inside of me. I too experienced extreme and volatile anger in my childhood.

Thankfully though, instead of a leather belt or a whipping hand, it was violent words that were lobbed my way, The man in my childhood home (I am reluctant to say “parent,” as a true parent would never treat his children this way) threatened me and others with death on a regular basis.

He screamed that I would amount to nothing, that I was a useless burden, that I was as dumb as a buffalo and that I’d be “thrashed to a pulp” if I didn’t watch out. I lived in fear every single day, not knowing what demented words of anger would be fired my way next.

One thing I did know with certainty was that I was not wanted. I was told one day that they’d wished I’d been a boy and not a girl, especially as I was their first born.

Well, I left that toxic environment a long time ago.

At 19, I walked out with a ratty suitcase in my hands and $20 in my pocket to start life as an new immigrant in a new country. I healed my emotional wounds, forgave but not forgot, bootstrapped myself from the ground up, and did everything I could to create an independent and healthy life where I can keep clear boundaries.

They say that we come from the universe (or your form of god whoever that may be) and that we merely come through our parents into this world. Some of us are luckier than others. It’s just the way it is.

So, instead of dwelling on the outrage that wells up inside of me as I think of my past and family, I use it to give thanks for the lessons I’ve learned and to push me forward, onward and up.

In his book, David gives a challenge after every chapter. The first is to address the adversities you faced growing up, so you can look at it clearly in the face and tell it you’re better than it, that you can overcome it and stand strong and proud as you.

I’ve just shared mine. What’s yours?

I’d urge you to take on this challenge. You will feel an immense pressure being relieved when you do so.

If you want to read the full book, you can find it right here:

Note this is an affiliate link.